The answer is potentially, yes, in that there is a potential for discrimination if the dress code conflicts with an employee’s protected characteristic under the Equality Act 2010 and this could lead to a direct or indirect discrimination claim. 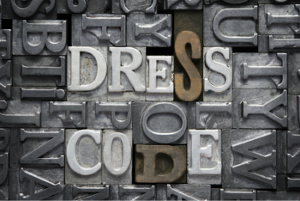 Within reason, an employer can place restrictions on the clothing of its staff – although onerous and unreasonable restrictions may have a legal and a practical impact:

There have been reported cases in the press concerning the right to religious freedom where corporate image was second place to religious freedom (Eweida v British Airways plc [2010]). The case of Chaplin v Royal Devon & Exeter NHS Foundation Trust [2011] EqLR 548 went all the way to the European Court of Human Rights (ECtHR) and in contrast, the health and safety of nurses and patients was held paramount and a ban on jewellery was permitted by the employer.

What about ‘dress down Fridays’?