Kerseys Gets Care Home Off the Ground

An award-winning care home, which employs around 90 people, was nearly never built when bank lenders suddenly pulled out — the owners have revealed. But with a little help from Kerseys, the project got off the ground.

Building was almost brought to a halt on the Baylham Care Centre, whose replica 1950s village high street made headlines earlier this year, when the recession hit and capital funding dried up.

Adrian Fairburn and mum Prema Fairburn-Dorai, who had put £150,000 of their life savings into the project, were left devastated.

Adrian, 33, said: “We had a number of interested lenders before the recession, but the collapse of Wall Street bank Lehman Brothers changed everything – they all pulled away, saying the existing plans wouldn’t be profitable enough.

“My mother and I were really passionate about this development and were devastated at the thought of not being able to see our dream through.” 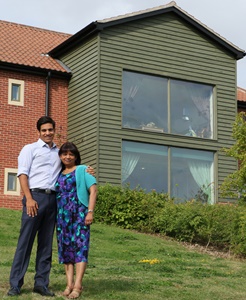 But then Kerseys solicitors, where Adrian works as part of the business development team, worked on meeting lender Natwest’s needs by changing the original plans.

Ten extra bedrooms were added to the development- so it would be seen as a more sustainable venture.

Kerseys  then put forward a case for the family to reapply and ultimately succeed in securing a loan.

King’s College law graduate Adrian, who has worked part time at Kerseys since leaving university 12 years ago, said: “Kerseys played a big part in making sure the development got the go ahead. It actually ended up as a much better scheme. It was obviously meant to be.”

Adrian said the company allowed him to work part time while he worked on the family-run care home.

Adrian, who visited the site in 2007 with Kerseys partner Kimat Singh said: “It was just a field, but we had faith in our vision of what could be done.

“Kerseys have helped get this project off the ground in more ways than one and have been there from the beginning. There have been challenges along the way, but the care home has been a real success story.”

Kimat, whose specialism includes development and planning, said: “We’ve known Adrian for a long time and knew how important this project was to him and his family. We were happy to play our part in getting it off the ground.”

Cardinal Healthcare Group has residential and nursing care homes in Baylham and Barham in Suffolk.

The Baylham Care Centre includes a post office, butchers, sweet shop and greengrocers, was built to help people suffering with dementia to help bring back some of their memories.