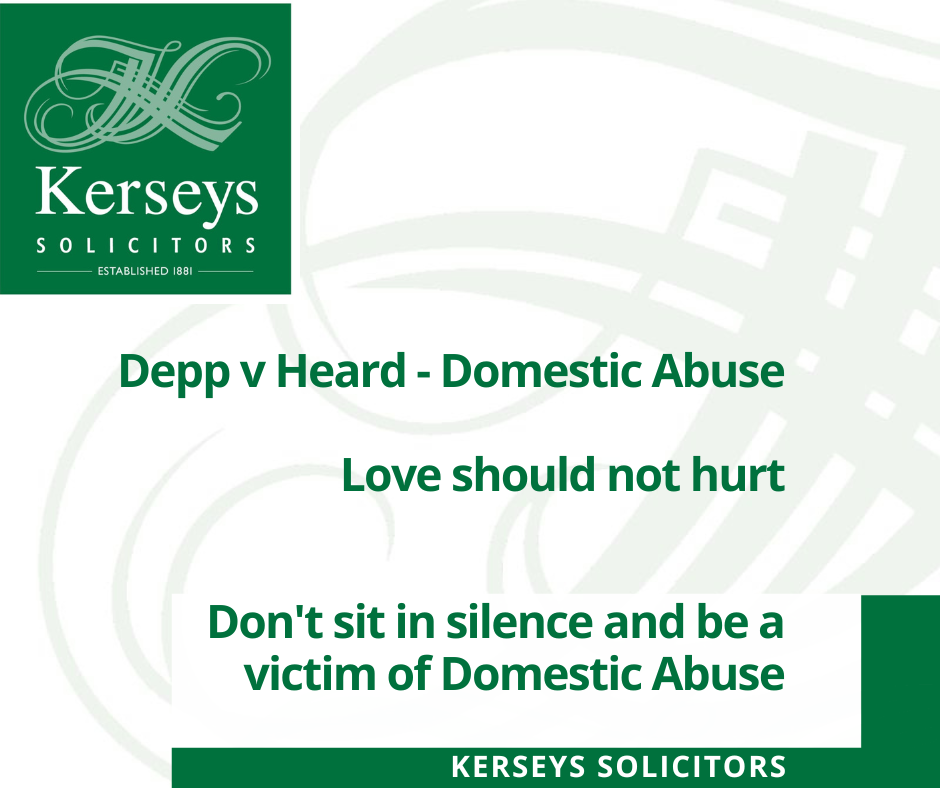 Domestic violence – love should not hurt.

Front and centre, whether you like it or not, the Johnny Depp v Amber Heard trial has been played out on mainstream as well as social media  over the past 7 weeks. This is an American civil trial where Depp is suing his ex-wife for $50 million for defamation. Its significance, however, has been to thrust into the public spotlight the issue of domestic violence (DV).  Relating it to the UK, there was a worrying uptrend in reported cases of domestic violence since the pandemic in 2020.

Despite the recent figures showing a small reduction in the number of domestic violence orders made.  Research produced by the House of Commons’ Library reported how calls to the National Domestic Abuse Helpline between April and June 2020 actually rose by 65 per cent when compared to the first three months of that year. There were 38,528 domestic violence orders (non-molestation or occupation orders) made during the course of 2021. That represents an increase of 70 per cent in just a decade.

The organisation “Safe Lives” works with those dealing with victims and perpetrators. It also challenges those who commit domestic abuse to change their behaviour in an effort to prevent future offences.

The organisation’s study, entitled ‘Hit and Miss’, involved speaking to 35 individuals working across both the legal system and public or charitable bodies tackling domestic abuse. The study found that there were “clear knowledge gaps”, such as a lack of ability to recognise or understand certain types of abuse and a failure to respond “appropriately”.  It also highlighted the need for better appreciation of the emotional and psychological impact of abuse on survivors – adults and children alike – resulting from their use of the family court system.  Domestic abuse – whether physical, emotional or psychological in nature or presented as coercive and controlling behaviour is now a common feature of our cases and no doubt that of many other family law firms across the country.

The courts, CAFCASS and solicitors need to explore the factual and evidential basis of abuse allegations issues. However, they might not always approach these very sensitive matters in the right way and more education and training is required to grapple with this sensitive issue. One thing which is apparent is that abuse survivors want clarity and compassion. They want to know what’s expected of them and to be able to contribute what is required, albeit with the necessary support to help them cope with the experience. Equally, those accused of being the perpetrator need guidance and support.

With the media and soap operas like Coronation Street and EastEnders tackling this issue there is the chance that people will weaponise DV to somehow gain an advantage in injunction, financial or children applications. We must not fall into the trap of blindly and recklessly throwing around allegations of DV and be sensitive to the ramifications of getting it “wrong”. A careful balance needs to be struck.

The legal process can be intimidating for many people who have not been subjected to abuse. For those men and women who have or who have been accused of committing DV – and who are examined on the details of what they have suffered or allegedly carried out – it can be even more daunting and emotionally exhausting.

At Kerseys we have access to a wider range of professionals to support clients and their families while they go through the legal processes needed to press on with their lives. By applying a sensitive and compassionate approach to this issue whilst giving clear guidance and legal advice, whether you are a victim or the alleged perpetrator we seek to avoid compounding what is already a distressing and stressful situation.

If you have been affected by domestic violence, in any form, and want more information please contact the Family Team at Kerseys Solicitors in Ipswich Suffolk 01473 213311 or Kerseys Solicitors in Colchester Essex 01206 584584 alternatively visit our web site and click “Call Me Back” and a member of the team will be happy to call you.